How to Build a Shower 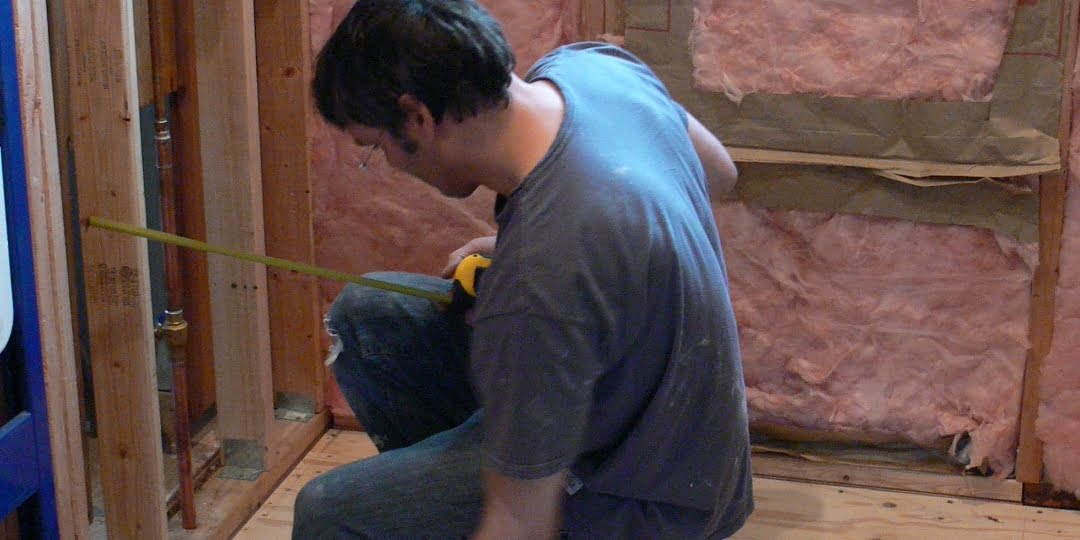 How To Build a Shower: Framing and Plumbing

This is the first of three articles in our Building a Shower series:

In this first article of our series: How to Build a Shower, we walk through the first two steps of building a high-quality walk in shower; 1) Framing the shower and 2) Installing the supply and drain plumbing for the shower.

The building blocks of a custom walk-in shower are simple. You need suitable framing for the walls, ceiling and a shower floor (shower pan) and rough-in supply and drain plumbing.

Start with the Framing

Construction of a built-in shower begins with suitable framing for the walls, ceiling, and floor.

If you are remodeling and adding or modifying a shower within an existing bathroom, you may not be able or need to do any work on the wall or floor framing for your shower project. If, however, you have access to the wall and floor framing, use this opportunity to fix any issues with wall and floor structural components.

Shower areas, and bathrooms, in general, are wet, humid environments that foster rot and deterioration of floor and wall sheathing and structural framing. Look for it and fix it while you can. 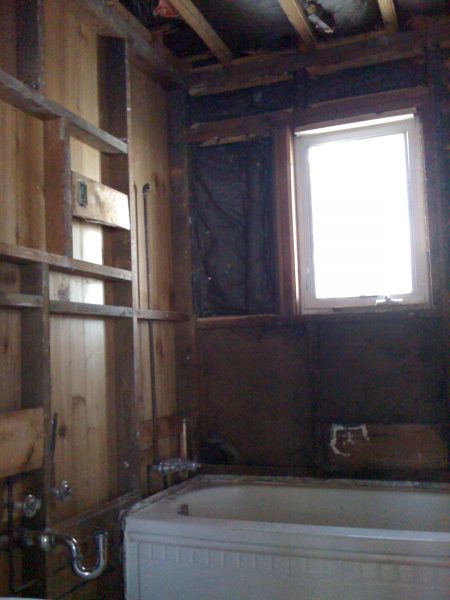 Framing prior to rebuilding. Notice wide, irregular stud spacing. Framing under window is wet and rotted.

In addition to replacing rotted members, consider reinforcing floor joists and wall framing to provide the necessary stability for tile.

Tile finishes, especially on floors, require relatively stiff, flat surfaces that resist deflection with load. Specific recommendations are available from the Ceramic Tile Institute of America. In general, most tile floors will require subfloor deflection of less than 1″ in a 360″ span (L/360). The requirements for natural stone tile are greater.

In addition to improving your bathroom’s framing, consider upgrading your subflooring under your planned shower.

Subfloor’s that flex too much can crack tile and cause the tile to release from their thin set adhesive beds. The perfect foundation for floor tile is one that is very flat and very stiff — older style 2″ mortar beds are perfect. Wood foundations tend to flex and often require reinforcement prior to laying tile. Ideally, wood subflooring for tile floors should have at least two layers of exterior grade plywood (3/4″ is best) oriented at right angles to the floor joists. Floor joist improvements can also help provide a more stable foundation for floor tile.

For this project, I planned to install tile on the bathroom floor in addition to building a new shower and therefore used two layers of 3/4″ plywood.

Although not under as much stress as floor tile, wall mounted tiles are also susceptible to excess movement. Walls with too much flex can lead to tile breakage and release, grout disruption, and damage to the waterproofing (especially if paint-on variety). If accessible, wall studs can be reinforced with bracing and metal plates prior to tile backer board installation. If your shower plan necessitates horizontal seams in the tile backer board installation, you may consider installing horizontal blocking between studs to support these seams, especially if using heavy tile.

Here is a brief summary of things that can be done to improve structural elements before tiling bathroom showers, floors and walls:

Once you are satisfied with the structural components for your shower build, begin working on the shower plumbing. Your shower requires both hot and cold supply plumbing and drain plumbing.

Supply plumbing requirements depend on the type and number of fixtures you plan to include in your new shower and the specifics of the mixing valve you plan to use. Typical showers operate satisfactorily with 1/2″ supply lines.

Showers with high flow shower heads or using multiple shower heads may require 3/4″ or great diameter supply lines. Consult the installation documents for the shower mixing valve and fixtures you plan to use.

Drain plumbing may already in place prior to your shower build. Often, existing plumbing is inadequate and may benefit from revision. Newer plumbing code requires a 2″ diameter drain pipe, and many older shower and tub drains are only 1 1/2″ diameter. All drains require a trap to prevent the flow of sewer gas into living spaces. If you are revising your drain plumbing, you may need to incorporate a clean-out fitting into the drain plumbing branch if not already in place.

Building a beautiful walk-in shower takes time and effort. The first steps of framing the space and plumbing the shower provide the foundation for a highly functional, durable shower and are important. Invest some time in getting these steps right, and you will enjoy your shower for many years. Below, I outline the steps I took to build a new walk-in shower during our cabin bathroom remodel.

Be sure to consult national and local building and plumbing codes prior to performing any work on your home. If you are unsure about approved plumbing techniques, consult a plumber to check your work prior to closing walls and floors. Plumbing errors can lead to very expensive future repairs and potentially dangerous conditions within your home.

Build a Shower – Framing and Plumbing – Step by Step

How to Build a Shower – Framing, Plumbing and Drain Install Image Gallery

Original bathroom and tub and shower prior to bathroom remodel.

Demolition of old bathroom and shower tile and walls. Notice improper use of gypsum drywall as tile backer board.

Cement board attached to two layers of 3/4" exterior grade plywood as subfloor for bathroom tile floor.

Cement board underlayment used just over the floor area in the bathroom.

Shower supply shut off valves for hot and cold circuits.

Shower drain circuit viewed from below.

Stub out the shower drain pipe, leaving extra pipe height prior to cutting to length to fit an adjustable shower drain.

Setting up to determine drain pipe height using the floor drain base.

Dabs of white pipe dope on the heads of the drain head will mark the location for the drain hole on the subfloor plywood.

Use drill with hole saw attachment to cut hole in plywood at the center of the screw marks.

Primer and cement applied to shower drain pipe and drain base.