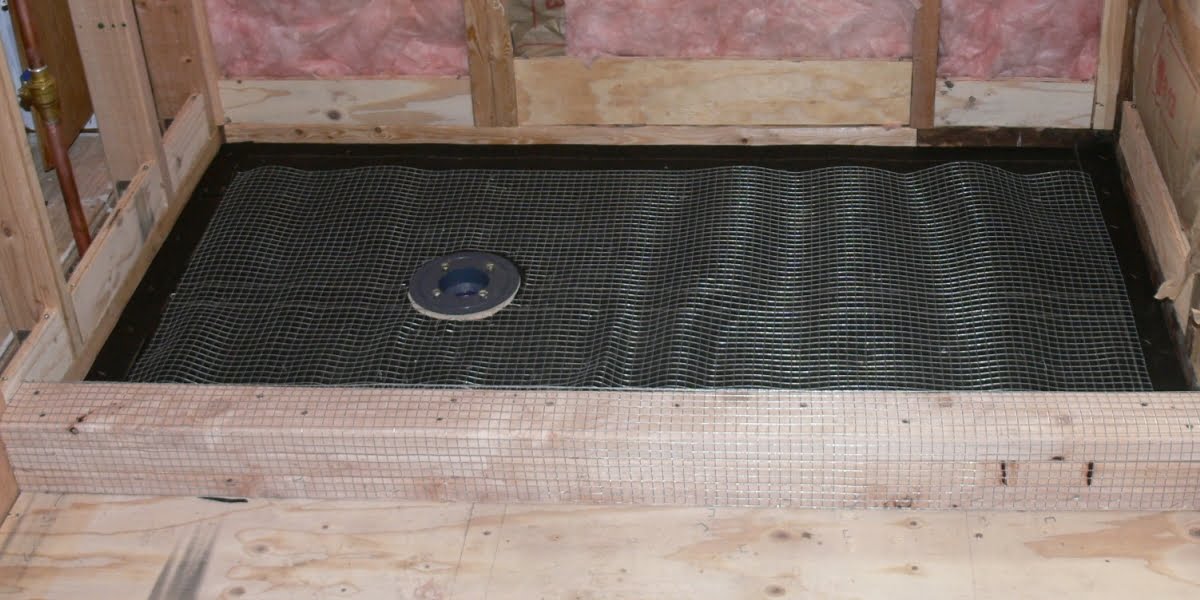 Shower Pan for Tile: What it is and how to Build One

A shower pan is the sloped base of a walk-in shower that forms the shower floor. The shower pan usually is built around a specialized floor drain which is sealed to the waterproof layer of the shower pan.

Traditional shower pans where built using dry-pack mortar (concrete) with an embedded waterproof membrane or layer that is sealed to a specialized shower drain that allows water to drain into the main drain opening as well as side weep holes.

ALSO READ :   How to Install a Whole House Water Filter

The finished shower pan forms the slight-sloped floor of the shower and is often finished with a tile surface. A shower pan is traditionally constructed in two layers with an embedded water-proof membrane or layer in the middle.

This middle layer serves the special purpose of redirecting any shower wastewater that has passed through the surface of the shower floor back into the drain.

While the sloped surface of a typical shower pan handles a majority of shower wastewater, proper functioning of the water-proof middle barrier or shower liner (#2 above), is crucial for a properly functioning, dry, mold-free, leak-proof shower build. Mortar is water resistant but readily water permeable. Because of this, some water will find it’s way through the shower floor and if this passed water is not stopped, will result in a leaky shower.

So Why Build a Traditional Mortar Shower Pan?

Although there are many ready-made shower pan systems available, it’s hard to beat a traditional hand-made mortar shower pan. Hand-built mortar shower pans are inexpensive, long-lasting and, if done right, reliable and leak-free for decades.

ALSO READ :   How To Install a Vapor Barrier in a Crawl Space

While off-the-shelf pre-made shower pans offer speed and ease of installation, they often lack the rigidity, strength and flexibility of a hand-poured mortar pan. Packaged systems (Kerdi, others) get expensive and complicated without offering compelling advantages over hand made shower pans. But, hand-made mortar shower pans do require a bit of patience and work.

How Do You Build a Mortar Shower Pan?  Its All About the Layers…

A hand made shower pan is built in layers around a shower drain assembly.

Building a mortar shower pan is a relatively simple task of assembling these layers. It will take a bit of time and some work, but the reward will be a long-lasting, leak-free, durable shower base.

Start With A Strong, Stable Base

A new shower built with a mortar shower pan, concrete backer board and tile is heavy. Before you begin, ensure that you have adequate sub-flooring, framing and appropriate shower drain plumbing in place. More information regarding the prep and finish work of the shower pan can be found in the other shower construction articles:

If you are ready to build your own shower pan, read on. Prior to starting on the build, you should have a properly framed and plumbed shower rough-in (covered in the first article of this series).

If all of this is in place, get your tools and materials ready to build a shower pan…

Prior to placing mortar for your shower pan build, your subfloor should be flat and suitably strong. I used 3/4″ plywood over reinforce floor joists. You will need to install the lower portion of the shower drain assembly installed (see How to Build a Shower: Framing and Plumbing for shower drain install details)

If building a shower curb, you have two main options:

Create the shower pan “box” form by installing blocking between wall framing members. Use framing pieces or sheathing material as blocking. I used scraps of the leftover 3/4″ subfloor plywood. The blocking should be at least as high as the shower curb.

Prepare the bottom of the should pan box for the first mortar layer by installing a layer of asphalt felt over the subfloor plywood. This felt layer will serve as a moisture barrier for the first layer of mud helping the mortar to retain moisture while curing. It will also help to isolate the subfloor from the shower pan. Install the asphalt felt to cover the entire bottom surface of the shower pan, cutting an opening for the drain. Secure with several staples.

If using a slope guide system like the Goof Proof Pre-Pitch (STD-201) guide, you would typically not use a reinforcement mesh.

Traditional floor mix mortar (floor mud, deck mud or dry-pack mortar), which is used to build mortar shower pans, is a 4 – 5 to 1 mixture of sand and Portland cement plus water. When making floor mix mortar, add just enough water to hydrate the mix. Excess water will weaken the mortar. Limit the amount of water by adding just enough water to create a thick, clay-like mixture that just holds its shape when packed. Once packed, you should not be able to squeeze water out of the mix.

A latex concrete admixture can be added to the mortar mix to improve compressive strength, flexibility, durability and adhesion of the mortar mix. Follow the directions of the specific product you plan to use. Generally, latex admixtures are substituted for some of the water in the mix. For my mortar mix, I used a 50:50 mix of water and latex admixture to hydrate the mortar.

To make the mortar, begin by dry-mixing the mortar mix (even if from a premixed bagged product) thoroughly with a hoe to ensure proper sand and cement contact. Next, add water (or a water plus latex admixture blend) using only enough water to create a mix that will hold its shape when squeezed in your hand, but not release excess water. Drier mortar mixes create strong, stable concrete with less shrinkage and higher compression strength.

With the mortar mixed, place the first mortar layer. Slope the mortar bed with a 1/4″ – 3/8″ slope from the walls to the drain location. Prepare for the slope by marking the walls of your shower with a mortar level that will provide the desired slope to the drain. Calculate the amount of height needed at a wall by multiplying the distance to the wall from the drain in feet by 1/4″. For example, if the is 3 feet from the drain, the wall mortar level should start 3/4″ of an inch above the drain edge level. To draw wall mortar height guides around the shower, measure any point, add the amount of needed rise and use a level to continue that line around the perimeter of the shower.

You can also use a commercial slope guide (like the Goof Proof kits) to help easily create a uniform pitch mortar bed.

With your shower walls marked and/or a slope guide set up, place your mixed mortar into the shower pan and begin forming your base (“pre-slope”) mortar layer. Add mortar to the pan starting at the rear of the shower pan. Use a straight edge or similar to screed the mud from the wall mark to the edge of the drain base and continue adding mud until the entire pan is formed. If using a pitch guide, like the Goof Proof products, the tops of the plastic struts will form the top layer of the mortar bed and serve as screen guides while forming the mortar bed.

Next, add mortar to form the base mortar layer of the curb. If using 2 x 4s as I did, add mortar to the outside surface of the lumber with its’ attached wire mesh and smooth. If using forms, commercial or your own, fill them with mortar and tool smooth.

Allow the shower pan and curb mortar to cure at least overnight.

Installing the shower liner by first measuring and cutting it to the proper size.

Unfold and spread out the shower liner over the shower pan and around the shower curb. Allow the an additional 8 to 12″ of liner at the shower walls to allow you to carry the liner up the walls well above the level of the shower curb. Before cutting the lineer, be sure to thoroughly flatten the liner along the surface and corners of the pan and shower curb. Liners installed without sufficient slack can stretch and fail.

The liner should be one continuous piece, covering the entire pan, up the walls and over the curb. The liner  is the waterproof barrier for the shower pan – think of it as a pool liner that will need to hold the entire volume of water contained with the pan up to the shower curb. Do not leave it too short when running it up the shower walls and don’t cut or penetrate the liner within this “pool” area.

Once you are satisfied with the position and lay of the liner, use a marker to mark the desired cuts on the liner. Do not cut the shower line at the corners or as it passes over the curb. Instead, fold the liner at corners (similar to wrapping a gift) and tuck them into the wall cavity at corners.

If you must cut the liner at the curb or for complex corners, use commercially available patch kits with the proper liner adhesive to cover the cuts.

It is essential that you do not penetrate the liner below the level of the shower curb as accumulated water can pass through fastener penetrations leading to leaks.

With the shower drain sealed to the shower liner, you should have a waterproof shower pan which can be flood tested once the sealant used under the liner clamp has cured.

With the lower portion of the tile backer board installed, mix and place the top mortar bed of the shower pan.

This top and final mortar layer of the shower is poured directly on top of the shower liner and will serve as the installation base for the floor tile.

Plan for 2″ – 3″ of mortar for this layer. Slope this top layer the same 1/4″ to 3/8″ per foot as the bottom mortar layer. This top layer of mortar should have sufficient thickness for mechanical integrity and in general, should be at least 1 1/2 – 2″ thick at the drain. Since you have already sloped the base mortar layer which you are placing this mortar layer on top of, this layer can be a uniform thickness, depending on the existing slope of the first layer.

To ensure proper slope of this top mortar bed, mark the walls as you did for the first mortar layer using a level to determine the proper mortar levels at the walls of the shower.

Once the mud is in place and at the proper slope and thickness, smooth and finish the surface with a steel finishing trowel.

Finally, finish the curb top surface of the a steel trowel.

You are now ready to finish the shower pan with tile. Before tiling, allow the completed shower pan and curb to cure for a day or two. See how to tile your shower here.

Back to Top
Close Create

Your password reset link appears to be invalid or expired.

To use social login you have to agree with the storage and handling of your data by this website.